Towards the end of our time in El Nido, we spent a day out at Nacpan Beach, a remote beach 45 minutes north of El Nido. We went to buy some coconuts, and the lady at the kiosk told us we should check out some rentable cottages further down the beach. So, coconuts in hand, we did just that. Nacpan beach is pretty spectacular, and the cottages were also pretty cute, so we changed our travel schedule, and decided to leave El Nido a day early to spend 2 nights at “Jack’s Place”. Getting there is pretty harrowing 45 minute tricycle ride, but it’s well worth it. Even Kevin says it’s the best beach he’s ever seen, and this guy knows his beaches.

First, we spent a day there before heading back to El Nido and checking out of Golden Monkeys. That day was amazing, and for the first time ever we saw cows on the beach (see photos below).

We returned the next day for two nights. That first afternoon was incredible, though that first night was a bit messy. Kevin and I set up the mosquito net completely wrong, and it ended up laying directly on top of Kevin for most of the night. This meant that he was bitten by mosquitos all over this body, and after he woke up realizing this around 3am, that was the end of sleep for the both of us.We spent the next few hours curled up in awkward positions with a way-too-hot blanket on top of us for protection. When the rose and the bugs subsided a bit, we headed outside to sleep in hammocks near the beach. A couple of hours later, we grabbed a bit more sleep back in bed. So, that was an awful few hours, but being in paradise more than made up for it. Lesson learned? When it comes to setting up mosquito nets, always ask for help.

We spent our days on the beach and in the ocean. Not having spent much time in the ocean as a kid, I had a lot to learn. Like, how to jump into waves. How not to get knocked over. I did lose my sunglasses, but other than that I’ve adapted well.

Jack’s Place only had power from 6pm to 9pm, so we took advantage of that time to hang out in a common area with a wonderful Swedish couple who were traveling in the region. There’s something interesting about living by the natural sunlight, and that something includes going to bed earlier than usual. In spaces like that, the company of other people felt especially valuable, and we welcomed gladly their conversation and card games.

Check out the photos below! There was more nature than we’ve captured here (chickens, dogs, ox, pigs, running around all over the place), but Nacpan is so lovely that even our photos can show it. 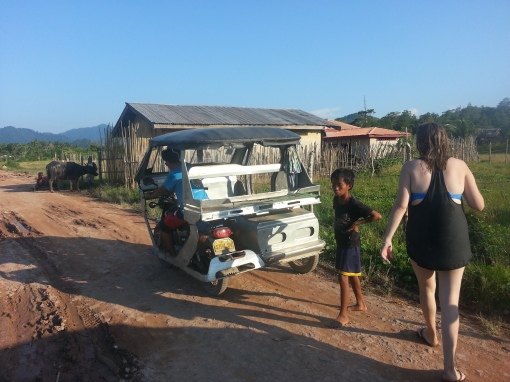 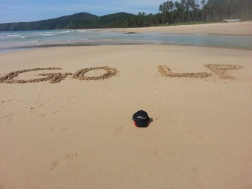 Cheering on LP and the WeatherTech Car from the beach! 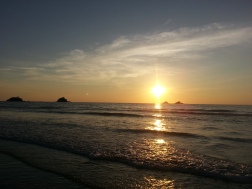 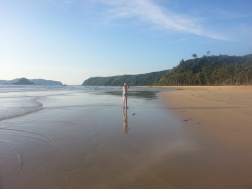 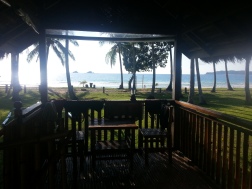 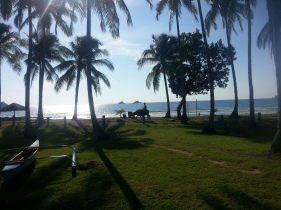 The view from our cottage – yes, that’s an ox pulling a cart in the distance 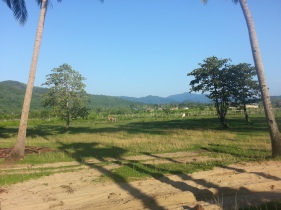 tanning away – can’t you tell how tanned I am??

we couldn’t get enough of this.

Me, sunscreening before continued suntanning

Again, Kevin making wacky jokes to crack up my brothers

These cows peed beside our towels, and then headed to a little pool for a drink 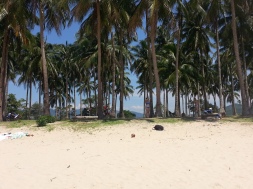 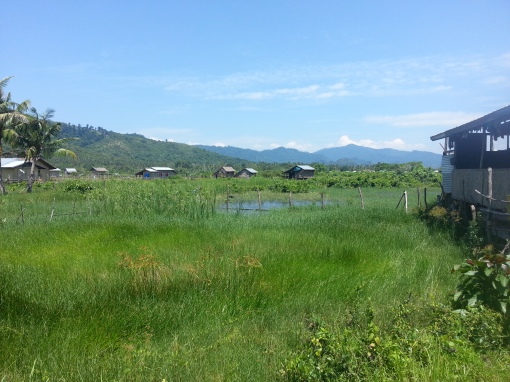 The view on our ride to Nacpan

Some kids, helping push along our tricycle

the road to Nacpan 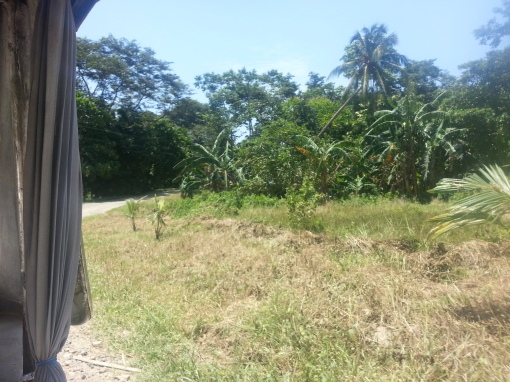 The view from our tricycle 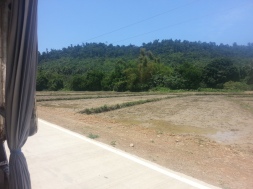 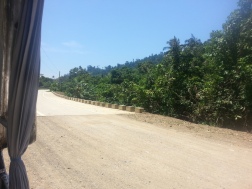 One of many semi-scary bridges