We had been gently warned by the rangers that most hikers should leave camp around 7:30 am to climb the John Gardner Pass, so despite the rain and chill we were up and on the move early on Day Four. Luckily the rain had calmed down over night so packing our tents up wasn’t too messy and we set out on our relatively short but very steep hike (the Pass is the highest part of the trail, at just under 1,200 m).

The trail started out with the forest and dirt we’d grown accustomed to, but turned to rocky switchbacks before long. The rocks made our footing a touch unsteady, and more than once my wobbly ankles almost rolled. Fortunately the weather had blown out after its overnight outburst, so we had relatively clear skies to make our upward grind tolerable and we reached the pass in just a couple of hours!

One of the great things about Torres del Paine is that it has so many beautiful features. Magazines often feature the Cuernos del Paine. Everybody makes time to visit the namesake Torres. And there are countless viewpoints and tours of Glacier Grey’s Southern tip. But for me, reaching the Gardner Pass takes the cake. There was something incredibly rewarding about climbing the 1,200 m and feeling exhausted but proud. Then just as you’re beginning to feel big, a king literally on top of the world, Glacier Grey slaps you in the face. You look out on a sheet of ice stretching further than you can even comprehend. It contains more white, greys, and blues than your eyes can register in its cracked surface and exposed depths. It stretches as far as you can see, ending only in purer and larger snow capped mountains. It was a truly humbling reminder that the Earth is just so much bigger than us. It’s just so much…ice. 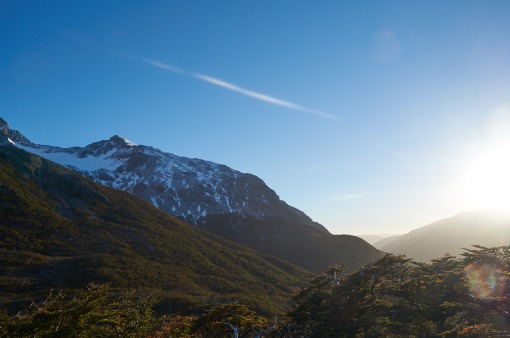 Starting out bright and early

Looking ahead…the pass is there somewhere 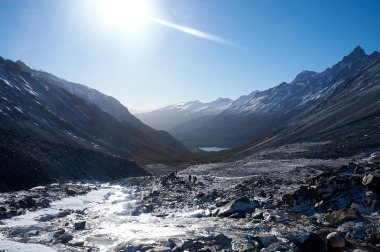 Looking back at yesterday’s glacial lake 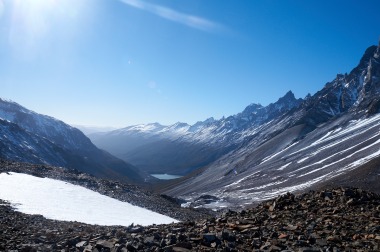 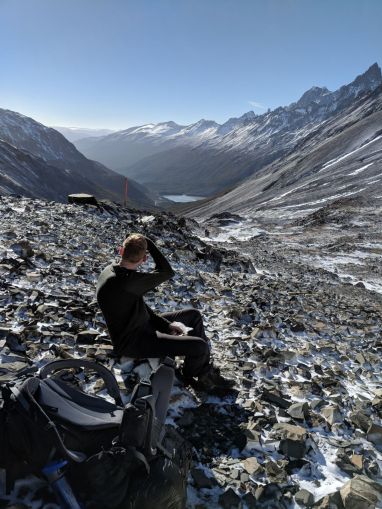 Reflecting, proud of the climb 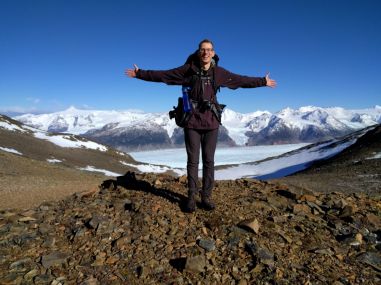 King of the world

The cracked surface is more incredible in person

The rest of the hike is relatively less grand. You turn back South and start working your way downhill. The hills are steep but there are often handrails and steps, (though that didn’t stop my Bambi-like grace from taking the express route once or twice) and a few lookouts through the trees reminding you of the inescapable ice sheet.

We arrived at Campamento El Paso in mid-afternoon a little tired from the day’s climb and pitched our tents before sitting about in the sun to warm up (the glacier is cold and we were tired). Dinner that night was a smaller affair as our “O-circuit” group had started to break apart as schedules diverged, but we still got to hear plenty of stories about Antarctic adventures and backpacking South America before we packed it in for the night.

Looking back, our near-perfect experience climbing the John Gardner Pass was pretty special. Because of its proximity to the Glacier Grey, and Patagonia’s generally hectic weather, the pass is frequently closed by Rangers, especially late in the season (when we visited). To that point: the two days after to our climb the trail was closed, and another two days later it was shut for the season. We just squeaked through!

Knowing this as we were reserving campsites we had actually bracketed in an extra day following the pass, and we awoke on Day 5 grateful for that. The weather had settled into a chilly rain (something to do with a giant glacier nearby?) and our legs were feeling some aches after the climb, so it was nice to start the day slowly. We hit the trail around 10 am after filling up on oatmeal and boiling enough water to brew our tea (Early Grey, hot).

The trail to Refugio Grey was almost entirely downhill through the same cliff side forest we had encountered the previous day. The views looking out at the glacier were similarly impressive, if somewhat diminished by overcast skies. And thankfully we had the views to enjoy, because what was billed as an easy stroll down to Grey became bit of a mental battle. A little bit because of the weather, but mostly because of our knees not enjoying the downhill slog. Almost five hours later we reached Grey tired, grumpy, wet (and probably smelly, it’d been five looong days).

Hitting the trail with dark skies ahead

We took our time crossing these bridges (don’t look down) 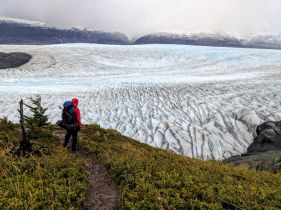 Staring back out at the glacier.

Nearing the end (marked by that island)

But boy were we excited to arrive! Refugio Grey marks the Western start of the more built up “W Circuit” so in addition to camping spots and a cooking room, Grey had a full lodge complete with restaurant, bar, hotel, and spa. Hallelujah! We dropped our messy backpacks at the door and stumbled inside ordering “tres cervezas” and cheers’d to rejoining society! We spent the rest of the evening chatting with fellow hikers beside the fire place, enjoying a couple drinks, and honestly just appreciating the comfortable couch.

After an evening spent relaxing, Day 6 became the easier day we needed. It was another late morning as none of us set an alarm, andeven when we finally sorted ourselves out we didn’t hit the trail right away. Refugio Grey is considered the starting of the “W Circuit” because of its proximity to and scenic viewpoints of Glacier Grey. So before leaving we wandered out to take our last looks. 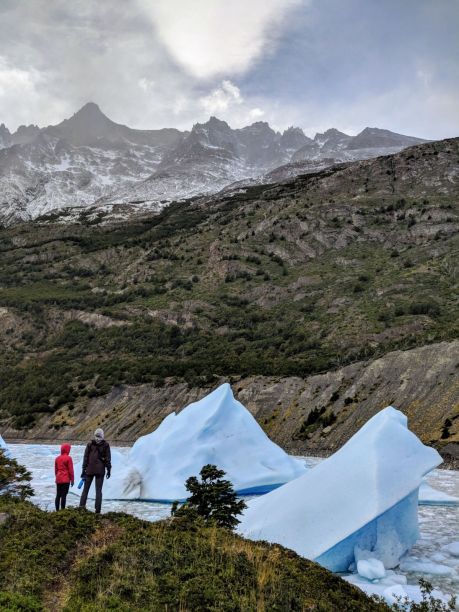 Afterwards we hit the trail, heading south to Paine Grande, and though the skies were grey the worst of the clouds blew over and our hike was dry. Much of the trail looked like our first couple of days: long grass and stubby trees. Knowing the day’s hike was relatively short we took our time, stopping for photographs and snacks throughout the afternoon.

Arriving at Paine Grande we were quick to understand how it earned the nickname “tent graveyard”. The lodge and campground are situated on a peninsula between two lakes, and wind gusts consistently threatened to uproot everything not bolted down. This was definitely our most nerve wracking tent set-up. Luckily our tents held on and, even though it was a noisy night, we woke early the next day with all our belongings!

Starting out, the mountains are always a prescence

The park is seriously strict about fires now 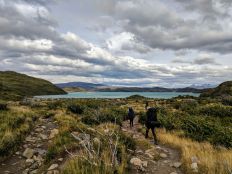 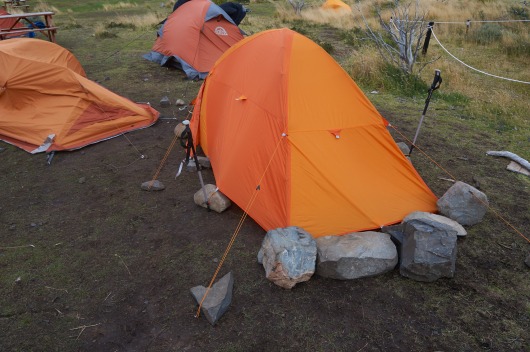 I really went overboard to ensure my tent was weighed down

View all posts by tptylerpage