For the next week we are in Mexico City, the capital of Mexico and the most populous city in the Americas (fighting neck and neck with Sao Paulo for the top listing). We arrived yesterday, and so far we are having a great time!

Of course, if you’ve been reading the news you also know that Mexico City suffered from an earthquake earlier yesterday afternoon. You can get all the details here but essentially there was a 7.2 magnitude earthquake off the southern coast of Mexico, which was felt across a wide area of the country, including Mexico City.

It was a significant event as the city is still suffering the physical and emotional after-effects of a deadly and destructive earthquake in September 2017.

Our flight arrived around 2pm and we were picked up at the airport by a driver, all arranged by our AirBnB host. We are currently staying at the world’s greatest AirBnB and our host, Leonore, is wonderful. She arranged for us to be picked up at the airport and then met us at our apartment. In fact, 10 minutes ago she dropped in to make sure we were okay following the earthquake (her cat and dog dropped in too! Photos to come later).

So, we arrived at our apartment for the week, chatted with Leonore about different sites to see, and then headed off in search of tacos.

We walked to a nearby taqueria, El Pescadito Condesa (highly recommend!). We loaded up our plates with delicious shrimp and fish tacos and settled in to watch the street life while we enjoyed tacos and beers.

Around 20 minutes into eating, everyone sitting near the windows jumped up and ran outside into the streets. Kevin and I hesitated for a few seconds until the restaurant manager gave a stern look and directions to get moving. And so we stood in the street in a crowd of distressed people and we felt the earth moving under our feet.

As it turns out, Mexico has an early warning system for earthquakes, the Mexican Seismic Alert System. It was this system that started the flood of people into the streets. And sure enough, as we joined the crowd we could hear the alert system and a few seconds later we felt the earthquake.

I’ve lived most of my life in Ontario, where there are few earthquakes and fewer reasons for people to worry about emergency preparedness. So when I felt the earthquake today I was definitely taken aback. It was unlike anything I’d previously experienced (obviously Kevin has experienced earthquakes in both Canada and Portugal, so I guess I’m behind the times). I am 100% okay, but it was pretty scary. Despite their well-founded distress and fear, the people of Mexico City proceeded with a calm and orderliness that was quite impressive. I have a lot to learn on this front.

That said, the event completely changed the tone of the city and the people around us. For the rest of the day we could tell that everyone was on their phones trying to get in touch with loved ones and confirm they were okay. The sombre emotions and stress were palpable as we walked around exploring the city for the next 3 hours. It should be interesting to see how this manifests throughout the rest of our trip.

Photos below from our first few hours in Mexico City! 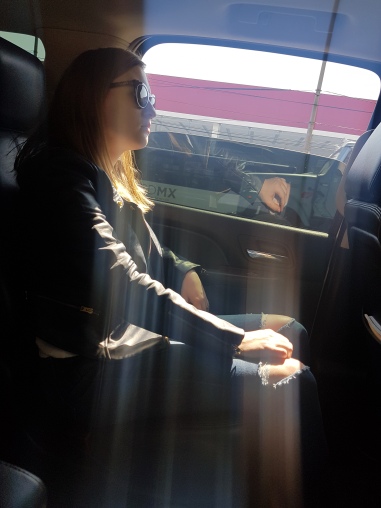 outside just after the earthquake…

walking around the city 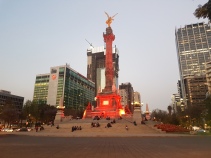