The entire Iberian peninsula (inhabited for 1.2 million years) is full of complex history, and for a long time Cordoba was at the centre of some of the most significant events in the region.

The Iberian peninsula (essentially the land that makes up Spain and Portugal) was inhabited by Romans in 112 BCE, and served as a resource centre for much of their empire (Wikipedia). The peninsula was conquered and re-conquered by many different groups after that time, but the glory of Cordoba began in 711 CE:

In 711, a Muslim army invaded the Visigothic Kingdom in Hispania. Under Tariq ibn Ziyad, the Islamic army landed at Gibraltar and, in an eight-year campaign, occupied all except the northern kingdoms of the Iberian Peninsula in the Umayyad conquest of Hispania. Al-Andalus(Arabic: الإندلس‎‎, tr. al-ʾAndalūs, possibly “Land of the Vandals”),[24][25] is the Arabic name given to what is today southern Spain by its Muslim Berber and Arab occupiers.

From the 8th–15th centuries, only the southern part of the Iberian Peninsula was incorporated into the Islamic world and became a center of culture and learning, especially during the Caliphate of Córdoba, which reached its height under the rule of Abd-ar-Rahman III[citation needed]. The Muslims, who were initially Arabs and Berbers, included some local converts, the so-called Muladi. The Muslims were referred to by the generic name, Moors.

The Wikipedia page on Cordoba goes into greater detail:

Caliph Al Hakam II opened many libraries in addition to the many medical schools and universities which existed at the time, making Córdoba a centre for education. During these centuries, Córdoba became a society ruled by Muslims.[6] It returned to Christian rule in 1236, during the Reconquista. Today it is a moderately sized modern city; its population in 2011 was about 330,000.[7] The historic centre was named a UNESCO World Heritage Site.

In May 766, it was chosen as the capital of the independent Muslim emirate of al-Andalus, later a Caliphate itself. By 800, the megacity of Cordoba supported over 200,000 residents – that is 0.1 per cent share of global population then. During the caliphate apogee (1000 AD), Córdoba had a population of roughly 500,000 inhabitants,[17] though estimates range between 350,000 and 1,000,000. In the 10th and 11th centuries, Córdoba was one of the most advanced cities in the world as well as a great cultural, political, financial and economic centre.[18] The Great Mosque of Córdoba dates back to this time. Upon a change of rulers, though, the situation changed quickly. “The vizier al-Mansur–the unofficial ruler of al-Andalus from 976 to 1002—burned most of the books on philosophy to please the Moorish clergy; most of the others were sold off or perished in the civil strife not long after.[19]

In the ninth and tenth centuries, Córdoba was “one of the most important cities in the history of the world.” In it, “Christians and Jews were involved in the Royal Court and the intellectual life of the city.”[20]

During the Spanish Reconquista, Córdoba was captured by King Ferdinand III of Castile on 29 June 1236, after a siege of several months. The city was divided into 14 colaciones, and numerous new church buildings were added.

The city declined, especially after Renaissance times. In the 18th century it was reduced to just 20,000 inhabitants. The population and economy started to increase only in the early 20th century.

The above-mentioned “Great Mosque of Cordoba”, the Mezquita-Catedral de Córdoba in Spanish, is the main event. Cordoba is a relatively small town now, and its skyline is dominated by the the Mezquita.

On Sunday, visiting the Mezquita was our main goal, but we started out with a long walk. We stopped by a bunch of churches, and we also saw the site of an old Roman Temple. We also stopped for a delicious lunch at Norte y Sur Taberna Selecta.

Our walk took us through the ruins of the original entrance to Cordoba under Roman rule, and around the walls of the old city centre. We didn’t plan ahead, and most of the small churches and museums we wanted to go to were closed on Sunday afternoon. However, the Mezquita was opened, and in we went!

This video is in Spanish, but it visually gives an understanding of how the Mezquita expanded over time.

Here’s what we learned from the (extremely high quality) guide that they gave out at the entrance:

This space has been home to a collection of buildings among which was thh Visigoth Basilic of San Vincente (mid-sixth century), which became the city’s main Christian temple. With the arrival of the Muslims the area was divided and used by both communities.

Abd al-Rahman I built the original Mosque (786-788) in response to the growing population. Its floor plan includes eleven naves standing perpendicular to the qibla wall, with the central one being higher and wider than the side ones. Unlike other Muslim oratories, the qibla wall is not pointing towards Mecca, but instead faces south.

The period of prosperity experienced under the government of Abd al-Rahman II led to the first enlargement (833-848). The prayer hall was extended with the addition of eight south-facing naves.

Much later, in the year 951, the caliph Abd al-Rahman III began construction of a new minaret. This reached the height of 40 metres and inspired the minarets in the Mosques in Seville and Marrakesh.

The Umayyad Caliphate saw the continuation of the period of political, social, and cultural splendour which led to the city replacing Damascus in terms of importance. Al-Hakam II carried out the second enlargement (962-966), the most creative of all.

The final of the enlargements (991) was a demonstration of power by Almanzor, hajib of the caliph Hisham II. In this phase the site was extended towards the east by adding eight new naves.

With the conquest of Cordoba in 1236 the Aljama was consecrated as a Catholic church, installing the main altar in the former skylight of Al-Hakam II. In 1489 adaptation of works were carried out to reflect the new religion with the construction of a Main Chapel. Once the Transept was completed in 1607 this space became known as the Villaviciosa Chapel.

It was Bishop Alonso Manrique who ordered the building of the transept (1523-1606). The construction process was begun by Hernan Ruiz I in an imaginative way, combining the caliphal naves with the transept in the form of lateral naves. From the outside, the transept’s brickwork gives the building an appearance of verticality which contrasts with the horizontal sensation provided by the Mosque.

You enter the Mezquita through the walled orange tree garden. It’s a beautiful and peaceful space, and a great lead-in for the Mezquita itself, which is an enveloping and calming building. Walking around, it’s frequently not possible to the end of the space, and yet the entire building is open concept, so the space feels endless. The scale of it all was remarkable, and unlike anything we’d seen so far.

The Mezquita is at the heart of Cordoba’s history, and if you’re lucky to visit this city, it’s a definite must-see!

After our time at the Mezquita, Kevin and I went to meet up with the rest of the group. We spent a couple of hours snacking and enjoying wine and each other’s company at a cafe in a plaza/square.

To end the day, our group headed out to cross the bridge and see the view of the city from the other side of the Roman bridge. Our second day was wrapping up, and while we didn’t get to see everything, but we felt like we had seen enough to appreciate the magic of Cordoba.

Many, many photos below from our hours-long walk through the city.

Standing outside the walls of the Mezquita on our first day in Cordoba! 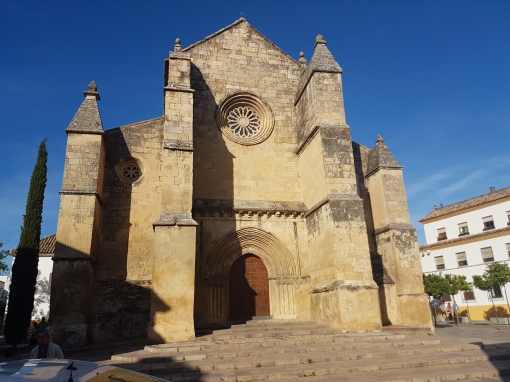 A church near our ‘pension’ 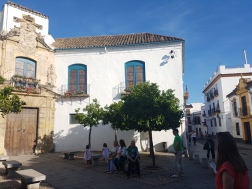 Standing in the streets of Cordoba 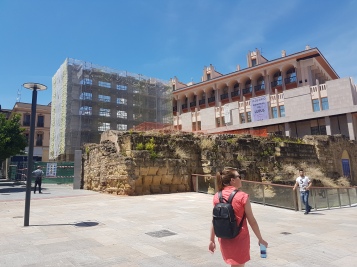 Walking up to the ruins of an old Roman temple

The temple was under restoration so we couldn’t see much

Another church in Cordoba!

a beautiful church in a small courtyard

Standing in a square in Cordoba 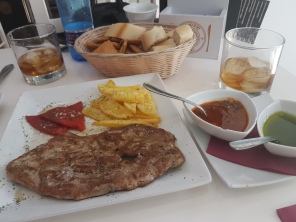 Exploring the old city of Cordoba 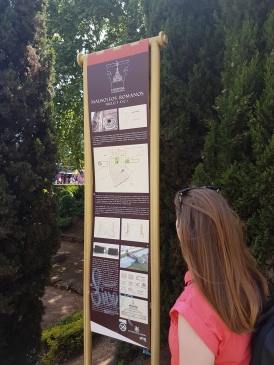 The ruins of the original entrance to the city 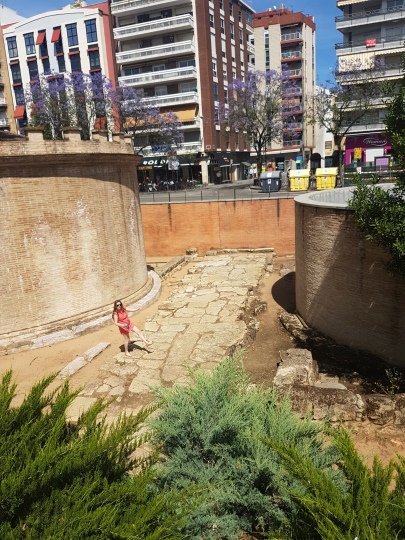 Behind me is another entry way to the city walls 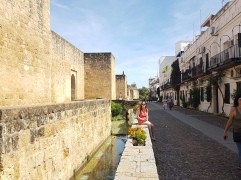 Sitting along the moat around the city walls 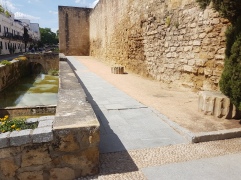 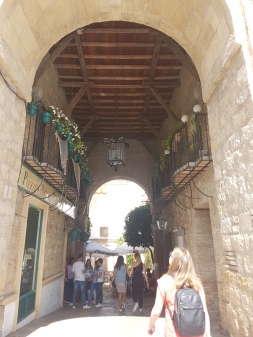 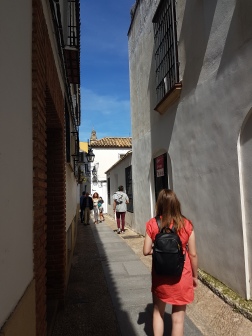 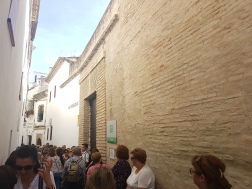 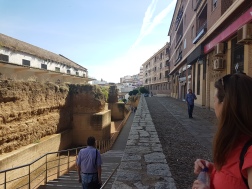 Roman ruins along the river! 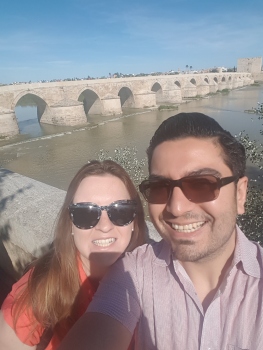 Selfie with an old Roman bridge! 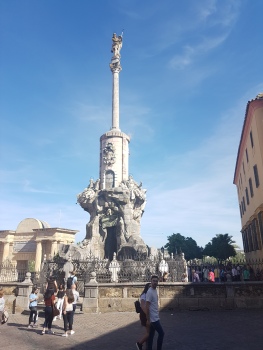 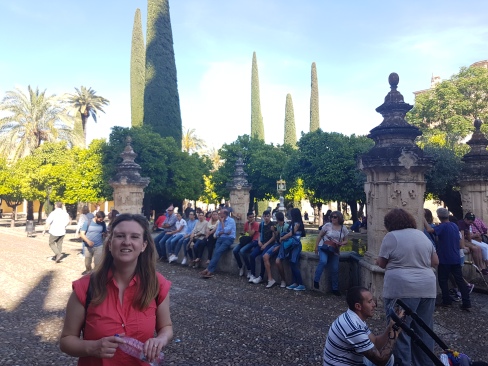 Inside the orange garden! 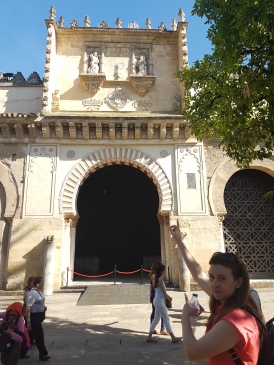 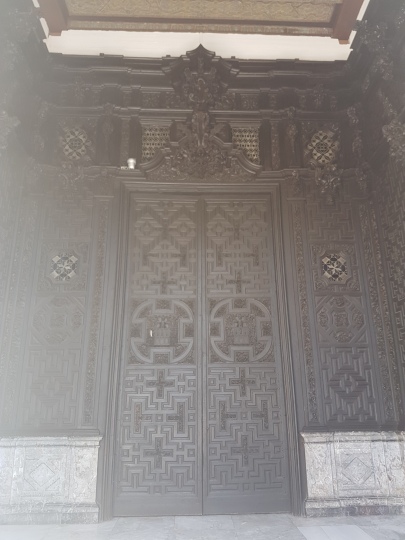 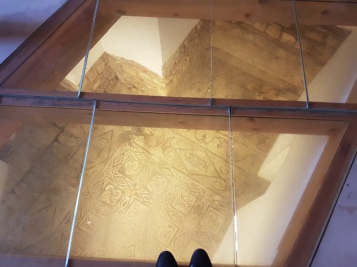 Inside the original mosque of Abd al-Rahman I 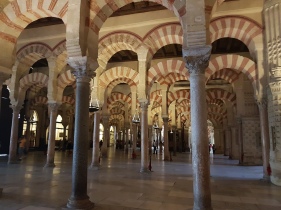 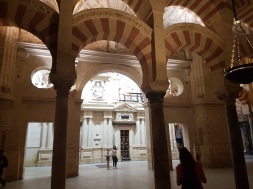 passing the basilica in the centre of the Mezquita

The enlargement of Abd al-Rahman II 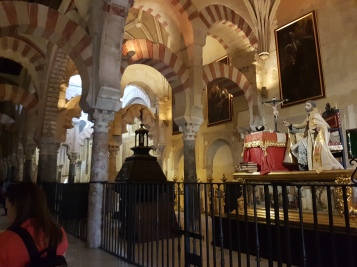 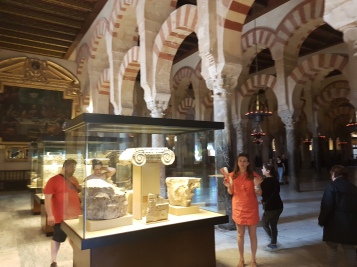 The Mihrab, a niche to show the direction of prayer, as well as a beautiful expample of Byzantine art. 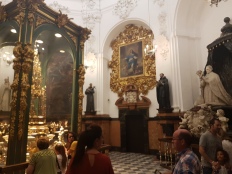 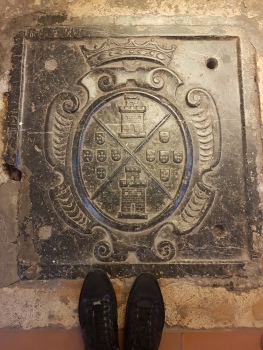 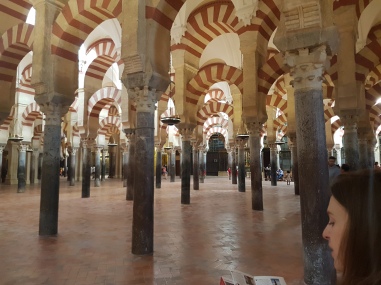 The enlargement of Almanzor 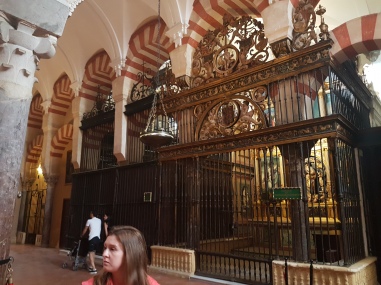 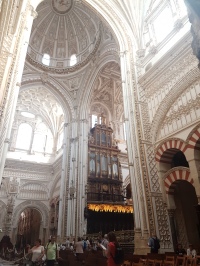 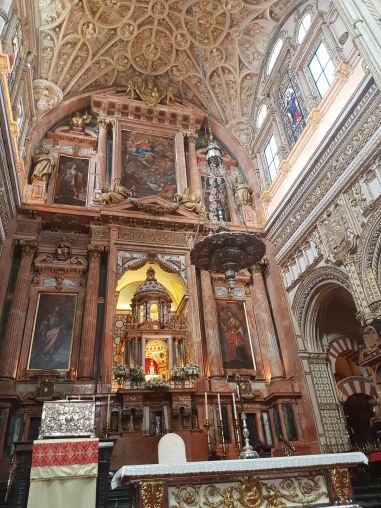 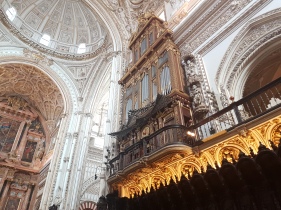 The organ and choir space in the Basilica