Before we came to Madrid, Zoya recommended we splurge on lunch at DSTAgE, a two Michelin star restaurant. She advised we’d need reservations, but when I tried to book us in, they were full.

So what did Zoya do? She called them. She got us on the wait list for lunch everyday that we were in Madrid. On Tuesday, they called her back while we were in the museum, so we couldn’t go. But on Wednesday, they called her back just as we were waking up from a late slumber. Perfect timing. We got up, we got dressed, and we went to lunch at DSTAgE.

Before we get into the amazing experience we had, a quick note on Michelin star restaurants.

The Michelin Guide assigns star ratings (1, 2, or 3 stars) to top quality restaurants in select cities around the world. Receiving a Michelin star rating is considered rather prestigious, as the Michelin Guide is famed for its extremely high standards. Here’s where it all comes from, according to Wikipedia:

In 1900, fewer than 3,000 cars graced the roads of France. To boost the demand for cars and, accordingly, car tires, brothers and car tire manufacturers Édouard and André Michelin published the first edition of a guide for French motorists, the Michelin Guide.[2] The brothers printed nearly 35,000 copies of this first, free edition of the Michelin Guide, which provided useful information to motorists, such as maps, tire repair and replacement instructions, car mechanics listings, hotels, and petrol stations throughout France.

Recognizing the growing popularity of the restaurant section of the guide, the brothers recruited a team of inspectors to visit and review restaurants, who were always careful in maintaining anonymity.[6]

In 1926, the guide began to award stars for fine dining establishments. Initially, there was only a single star awarded. Then, in 1931, the hierarchy of zero, one, two, and three stars was introduced. Finally, In 1936, the criteria for the starred rankings were published:[3]

Michelin reviewers (commonly called “inspectors”) are completely anonymous; they do not identify themselves, and their meals and expenses are paid for by the company founded by the Michelin brothers, never by a restaurant being reviewed.

The French chef Paul Bocuse, one of the pioneers of nouvelle cuisine in the 1960s, said, “Michelin is the only guide that counts.”[11] In France, each year, at the time the guide is published, it sparks a media frenzy which has been compared to that for annual Academy Awards for films.

So, that’s what the hype is all about. Accordingly, Michelin star restaurants are also quite expensive to eat at. Zoya and Shrip have found that, relative to other markets, Michelin star eating is a deal in Madrid, yet another reason why they encouraged us to try DSTAgE.

So, what about DSTAgE itself? The restaurant is typically described as a ‘concept’ restaurant, and its known for experimentation and creativity. The owner and chef, Diego Guerrero, was previously the head chef at a different two Michelin star restaurant, and left to create his own restaurant in contrast to the uptight tradition and style of other high end restaurants in the city.

According to the Michelin Guide:

This restaurant has an urban and industrial look and a relaxed feel that reflects the personality of the chef. The name is an acronym of his core philosophy: ‘Days to Smell Taste Amaze Grow & Enjoy’. Discover cuisine that brings disparate cultures, ingredients and flavours together from Spain, Mexico and Japan.

Now that you’re familiar with the concept of Michelin stars and with DSTAgE in particular, let’s talk about our experience.

On Wednesday, we woke up to a call from Zoya about our reservation. From there, we got dressed and strolled across the city for lunch.

One of the most interesting elements of our DSTAgE experience was how specifically everything was timed. When you arrive at the restaurant, you’re escorted to 1 of 2 stations at the bar of the open kitchen.

There, you meet one of the cooks, who makes and serves you a palette opening dish, following by a palette cleansing drink. In our case, we had shrimps cooked over a Himalayan salt rock, served on a homemade cracker. It was bizarre and delicious, and hit every tastebud. Over the course of our meal, we watched every other group of patrons go through this experience as well.

From there, you take a seat at your table, and decide how to tackle your meal. You can choose 12, 14, or 17 courses. You can also choose wine pairings for each course. We opted for 14 courses, without the pairings (it was lunch, after all!).

Our first course was the seafood of the day: “razor clam with celeri dashi, almonds mild and coffee nectar”. The presentation was so cool that we took a video:

When each course was brought to the table, our server explained how it was made, what is was, and how best to eat it.

After the razor clams, we had something described to us as “Thailand in one bite”. It was pandan radish with pandan tea, and reminded us so much of the rice we had in Cambodia, which was often served with pandan leaves. Unfortunately we didn’t snap a picture of this one.

However, we took photos of every other course, which you can check out below! I’ve added our notes on every dish below as well. As you can see, the amount and variety of food made for an intense experience, but it was absolutely worth it.

See for yourself below… and then consider adding DSTAgE to the agenda when you’re next in Madrid! 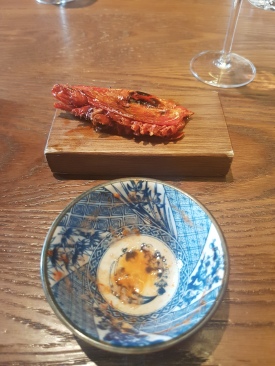 We squeezed the juices of the prawn head into the bowl, and then ate it. Messy and kinda weird but delicious! 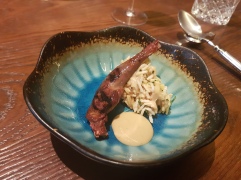 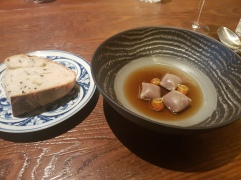 Tolosa bean ravioli on cabbage broth. Explosions of flavour in every bite! 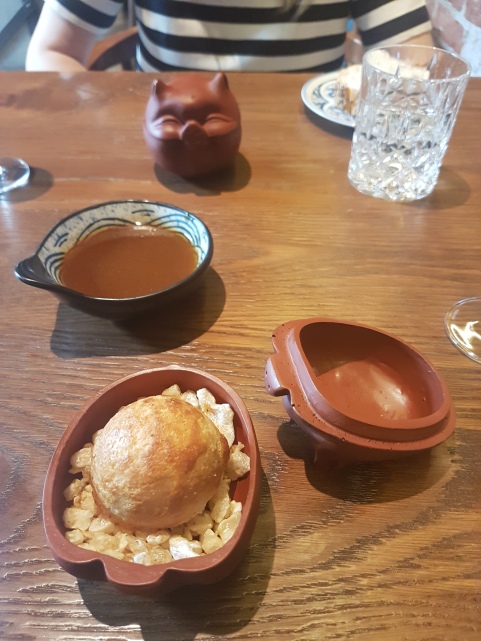 Crispy pork bun – Dip the bun in the gravy, and then roll it in pork rinds. So indulgent and so good. Once we ate the bunch, they gave us a spoon to finish off the gravy and pork rinds. 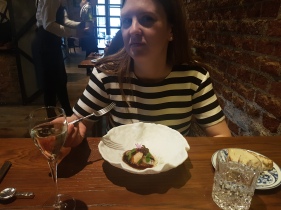 Already full but not wanting to stop eating. Many more courses to go! 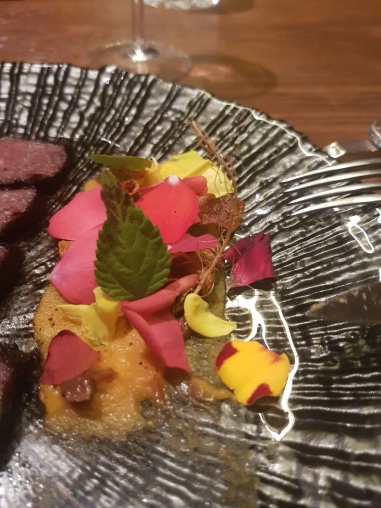 This is cooked over 2 days, and yet manages to be so tender. It’s brought to the table in a charcoal box, and you choose how much you want. So filling and so good. 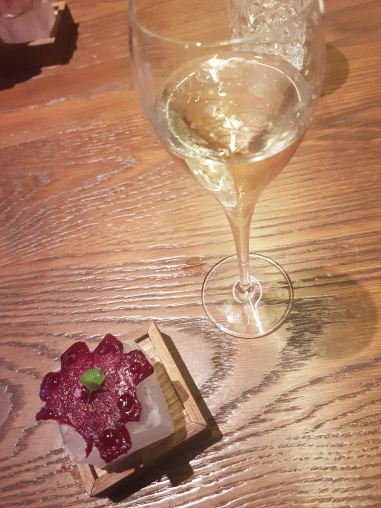 “Corn” – so much more than its name. This is ice cream, rolled in corn flavoured marshmallow, on a bed of cotton candy

We kept seeing this coming out of the kitchen, and I was so happy when they brought it to our table that I actually got teary-eyed. It was unforgettable.

“The spice trail” – actually a variety of chocolates and beans. The perfect amount of sweetness. 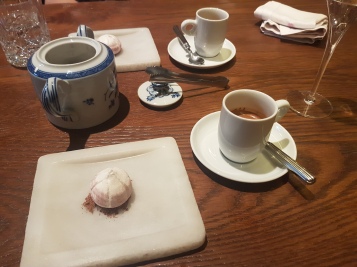 Ha. Kidding. Of course I can. 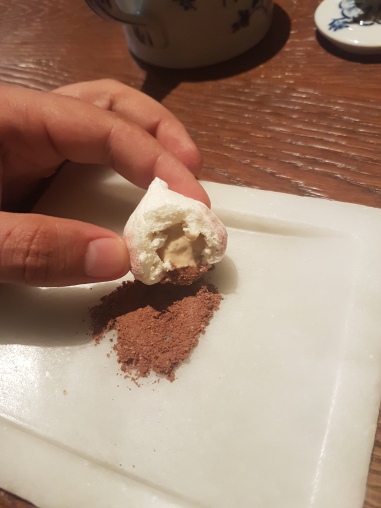 This is “Purple Garlic”

A quick shot of the cava we drank with lunch.

One thought on “Day 3 in Madrid – Lunch at DSTAgE”