We typically take our sweet, sweet time when doing anything, but because we were on a road trip, we had certain goals for where to be and when to be there by. We were also exploring unfamiliar territory, and perhaps underestimated how much time we’d want to spend in certain places.

That said, everything that we saw on the first day of our Road trip was within the magical area known as Sintra, where castles and natural beauty abound. There are tons and tons of incredible sites to see in Sintra, but we oriented our trip to the advice of our friend Soledad, and selected those she described as ‘must-see’ items.

We visited 2 different castles on that day, and they couldn’t have been more different: The Moorish Castle, and Palace of Pena.

Let’s start with the Moorish Castle.

The Moorish Castle was the decidedly more ruin-y of the two. It is a military fort built around the 10th century by the Muslim populations that occupied the Iberian peninsula. It acted as a control tower for the Atlantic coast and land to the north, serving as an outpost for the city of Lisbon.

For a building that’s more than 1000 years old, it was in pretty decent shape. All of the exterior castle walls remain, and we were able to walk up, down, all around, and catch amazing views throughout. From the top of the castle walls, you can see all that’s built up in the Park in the centuries since: a town, castles, mansions, etc. And yet, you can imagine how it felt 1000 years ago to look out and see no evidence of other people. Placed atop a large hill, this place is definitely an impressive and well planned military location.

And not *just* military either. After the large castle walls had been built, people began to settle just outside of them. A “second circle of walls” was later built to protect these settlements.

If you’re interested in the nitty gritty history timeline for the Castle of the Moors, check out Wikipedia.

After the Castle of the Moors, we headed to the Palace of Pena.

While it was cool, the Palace of Pena (Palacio da Pena) is one road trip stop we could’ve done without. We crammed a lot of sites into this road trip. That’s not usually our style, but we went a bit overboard with expectations for what we wanted to see. In its defense, it’s part of a large garden complex, but we only saw the castle itself, because it was raining and we were rushing to see another place afterwards (more on that later this week!). By rushing to see the Palacio, we cost ourself some appreciation of its history. The routinely under-informational museum pamphlet also didn’t give us the full story of site.

Here’s what Wikipedia has to say:

The palace’s history started in the Middle Ages when a chapel dedicated to Our Lady of Pena was built on the top of the hill above Sintra. According to tradition, construction occurred after an apparition of the Virgin Mary.

In 1493, King John II, accompanied by his wife Queen Leonor, made a pilgrimage to the site to fulfill a vow. His successor, King Manuel I, was also very fond of this sanctuary, and ordered the construction of a monastery on this site which was donated to the Order of Saint Jerome. For centuries Pena was a small, quiet place for meditation, housing a maximum of eighteen monks.

In the 18th century the monastery was severely damaged by lightning. However, it was the Great Lisbon Earthquake of 1755, occurring shortly afterwards, that took the heaviest toll on the monastery, reducing it to ruins. Nonetheless, the chapel escaped without significant damage.

For many decades the ruins remained untouched, but they still astonished young prince Ferdinand. In 1838, as King consort Ferdinand II, he decided to acquire the old monastery, all of the surrounding lands, the nearby Castle of the Moors and a few other estates in the area. King Ferdinand then set out to transform the remains of the monastery into a palace that would serve as a summer residence for the Portuguese royal family. The commission for the Romantic style rebuilding was given to Lieutenant-General and mining engineer Baron Wilhelm Ludwig von Eschwege. Eschwege, a German amateur architect, was much traveled and likely had knowledge of several castles along the Rhine river. The construction took place between 1842–1854, although it was almost completed in 1847: King Ferdinand and Queen Maria II intervened decisively on matters of decoration and symbolism. Among others, the King suggested vaul tarches, Medieval and Islamic elements be included, and he also designed an ornate window for the main façade (inspired by the chapter house window of the Convent of the Order of Christ in Tomar).

Having done my Wikipedia research, it’s clear that this place’s history actually fits well with many of the other sites that we saw in Sintra and in Tomar. That information was definitely not in the pamphlet we received upon entering, but either way we had a fun time. It’s by far the most colourful castle I’ve ever seen, which gives it an almost-comical appearance.

All this site-seeing constituted just part of our day. Enjoy the photos below, there’s more to come from our final (and favourite!) stop coming soon.

The Moorish Castle is super old and sits atop a hill

As you can see, the view is amazing.

So is the wind! 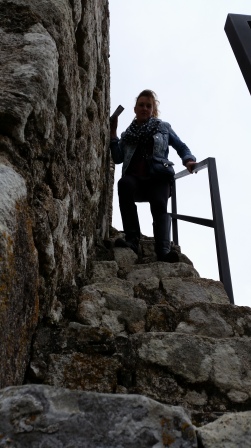 The stairs are also quite something!

we found a cat, of course. 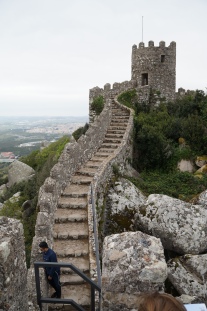 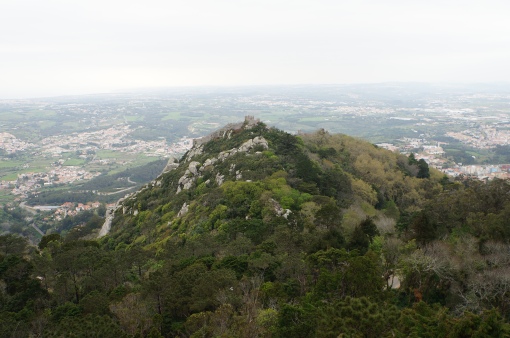 view of Sintra from the Moorish Castle!

From the Moorish Castle, we could see Palacio da Pena

Then we drove there, and Kevin sniped this wicked parking spot directly in front of the entrance 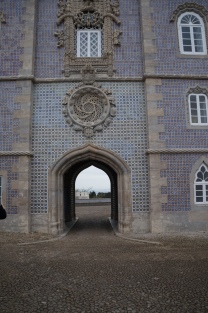 not a bad welcoming start, right?

you can’t tell from the photos, but this place was pretty packed with tourists. We complained about them constantly because we’re a bunch of spoiled snobs who don’t like others getting in the way of our jokes at historical sites. 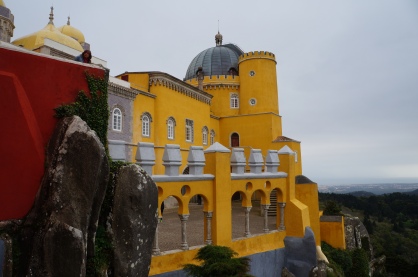 checking out the view!

and here’s that view I was checking out! 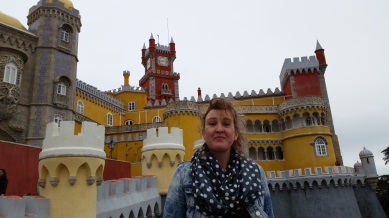 now I’m the one getting checked out! 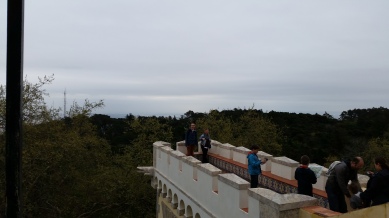 the great thing about travelling with Kevin is that he always takes your photo, and they’re never blurry. 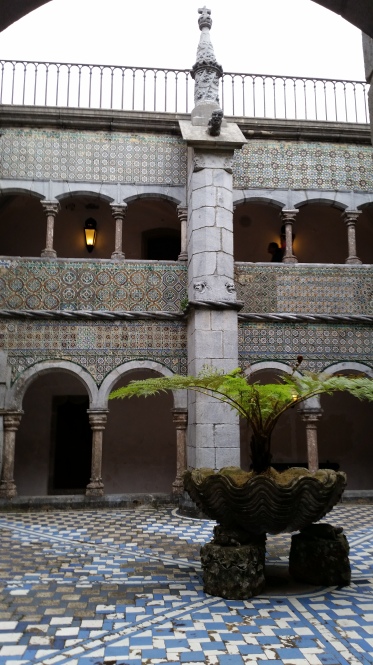 the tiling in the room was pretty next level

and just look at that plant holder! everything in this place was intensely detailed!

some type of old-school phone 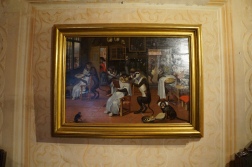 couldn’t resist a photo of these hip cats!

who doesn’t want a violin + matching vase. Tons of these on kijiji for sure! 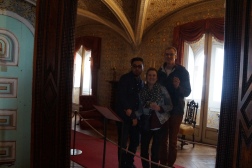 I made Tyler take a photo of this because I really want this wall paper in my house one day. Obviously it’s perfect.

the detail of the design here is pretty bonkers – this is just a simple handrail on a staircase! 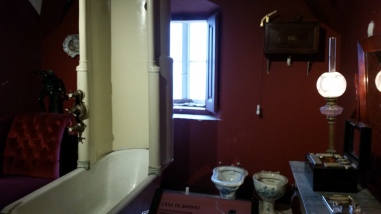 I thought it was cool that they had a proper running water situation happening up here. If memory serves, it was one of the first of its kind.

a lovely chair that somehow warranted a photo 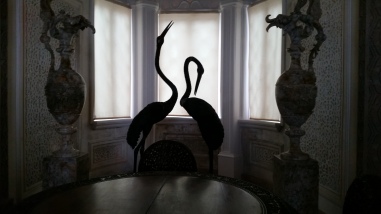 siblings in the house!!!

moose in the house!!!

One thought on “Roadtrip Day 1: A Moorish Castle and Palace of Pena”