Carnival is a fairly historied Catholic tradition (and probably goes back even further than that, really). I’m assuming most of y’all aren’t up to date on Catholic traditions, so here’s a quick refresher course, courtesy of our friends at Wikipedia:

Carnival (see other spellings and names) is a festive season that occurs immediately before the Christian season of Lent. The main events typically occur during February. Carnival typically involves a public celebration and/or parade combining some elements of a circus, masks and public street party. People wear masks during many such celebrations, an overturning of life’s normal things. The celebrations have long been associated with heavy alcohol consumption.

When we came to Portugal for a 2 week holiday last year, we were here for Carnival, so though this year’s festivities weren’t a surprise, they were definitely a delight.

In Canada, I’m used to parades being a rather straightforward affair. The first float marks the beginning, and the last float marks the end. As with most things in Canada, it’s efficient. In the fun-and-fancy-free mild Portuguese weather, parades are a bit different. Instead of a straight-line-kind-of-parade, the Carnival parade is on loop!

One of the most traditional Carnival parades is held each year in Alte. It’s definitely more old-fashioned than the parade in the neighbouring city of Loule, and it has more of a local/hometown feel to it. The floats line up, populated by people from Alte, and they’re observed by the townspeople from Alte and surrounding areas (including me and Kevin). Most people know each other, and everyone is drinking (float people and audience alike), so things get pretty fun pretty fast. For the first hour, Kevin knew and chatted with someone from every float.

The floats aren’t that big, so there are always crowds of people walking with them. And instead of being sponsored by or representing companies, community groups, etc, they’re simply a creative theme. Often, the players on the float act out a type of narrative as well.

One float’s theme was 101 Dalmatians. There was a “Cruella” driving the car, and a couple of henchmen who ran around picking up puppies and putting them in a big cage (who then escaped). The Braveheart float eventually staged a battle in the middle of the street, with various players storming their castle.

Because the parade goes on and on, the floats end up evolving; acting a kind of performance art. It’s artistic and it’s very fun.

I found some videos online taken at this year’s Alte Carnival. I played it for Kevin and his immediate reaction was “oh man, I know so many people in this … and everyone’s drunk”.

I don’t think I’ve ever been to such a fun parade. You can check out more vidoes here, here, and here.

We also went to the Carnival in Loule, and you can see photos of it below. Being in a city, it’s a much larger scale parade, with much fancier floats, often mocking various EU politicians. It’s neat, but doesn’t have the same spirit at the Carnival in Alte. Have a look below to see all the snapshots we captured! 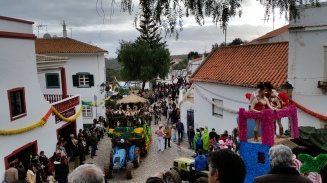 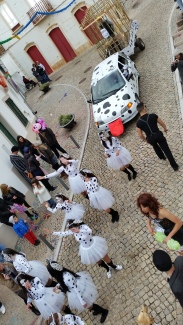 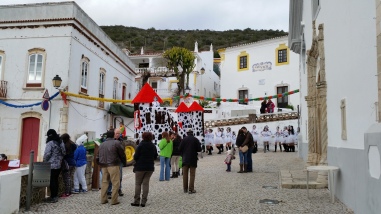 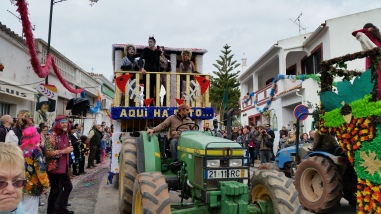 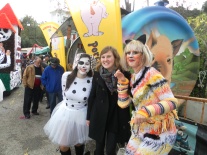 me with Catia & Soledad, 2 of our friends from Alte (and 2 of Kevin’s childhood friends) 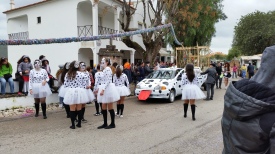 in my very own Carnival costume. (though I didn’t make it to the Carnival party because we went to dinner until 7am)

Socrates at the Carnival in Loule

Ladies at the Carnival in Loule

One thought on “Celebrating Carnival in the Algarve”