Once upon a time, when Europeans were running around claiming things with flags (maybe that still happens?), Phnom Penh was known as the Paris of the East, due to the beautiful architecture and boulevards that the French oh so graciously bestowed upon them. That said, colonization is not cool, but super awesome boulevards along riversides totally are. Silver linings? Maybe I’ll just stop there.

Moving along… the riverside in PhnomPenh, which runs along the Tonlé Sap river (parallel to the Mekong), really is a great public space that seems to be enjoyed by many tourists and Cambodians alike. The open spaces in Phnom Penh make this place special, and they also allow you to really enjoy and appreciate the beauty of the city and its unique combination of architecture. Temples and boardwalks, people. Many photos to come, but for now, here are some photos of me sitting near the riverside in Phnom Penh. 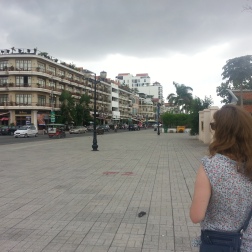